Every time I embark on a journey I make it my mission to get lost. Whether I’m in Brazil or just a few hours out my hometown, I always play the game of randomly choosing which way to turn at every stop. It hasn’t killed me (yet!) and I have seen some interesting sights that I wouldn’t have otherwise. 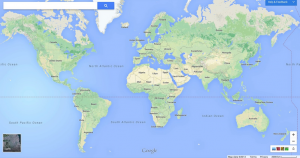 It has caused me a lot of grief though. I’ve gotten lost at least a dozen times in the past five years. I’ve had to call a relative to get directions back as they would sit on their computer looking at Google Maps. Not fun, but I’m not embarrassed…I always seek the thrill of the road less travelled.

But I have realised that the point of traveling isn’t the same as camping. The idea isn’t to detach from technology. Rather, it gives a great opportunity to embrace technology. People take pictures with their cameras, look up hotels and restaurants with their GPS system, and so on.

But here’s the kicker…all you need is your smartphone.

You have an access to a world of apps, literally, and some of them have a lot to offer you. I’m going to list five to give you an idea on how using apps may improve your travelling experience.

This one was a no brainer. It’s also pretty obvious – it’s Google Maps, available as an app.

My mother was the one that helped me to find my way about when I got lost and she was on Google Maps. A while later she discovered it’s available as a mobile app and she joked about how I should get it. Thanks mama, I did!

Most of my travels are a mix of business and pleasure. I always have to keep an up-to-date schedule for business meetings on hand and the WorldMate app lets me do this. This app also lets me centralise all my travelling information and plans, including my hotel, flight, and vehicle reservations.

I’ve become a bit of a nerd when it comes to travel apps. I keep an eye for new apps and every now and then one really catches my attention. The only problem is that most of them are limited to certain cities when they first launch. That’s the case with the Entertainer app, which I cannot use yet…but I can’t wait to. This app actually maps out places where active coupons (ex. Restaurant deals) are available and you can go in and just show the coupon through the app and you get the deal.

This may not be the prettiest app, but it is definitely one that’s worth having on hand. The app features pre-downloaded maps of cities, including labels for the different businesses. It’s essentially Google Maps, but without the need for a wireless Internet connection. This app actually saved me when I was on my way to Ski Armadillo in Verbier, Switzerland. I had the city map available offline, so I was able to locate the place without having to turn my data roaming on.

This is the travel planning app that I used to use. It has a very friendly and simplified interface that allows you to plug in all your travelling information in one spot. One of the cool features about this particular planning app is that it will alert you if there is a better seat that comes available on your flight. This app definitely comes in handy if you want to have quick access to your booking, itinerates, etc., while travelling.

These are just some of the many great travel-related apps that exist. I strongly suggest everyone checks out which travel apps are available that interest them as they can really make travelling less stressful and more fun. The only other suggestion I have is to keep in mind your data roaming charges as most apps require a wireless Internet connection to work.

5 thoughts on “Travelling in an App World: 5 Must-Have Travel Apps”