Finding authentic experiences around the world is getting increasingly more difficult, you have to go further and further afield to really feel like you’re ‘traveling’ but once you do that, you’re in for a real treat. Papua New Guinea offered me the sweetest of those treats. I arrived in the Capital Port Moresby from Australia but as soon as I landed in the international airport I went straight to the domestic airlines office and did something I’ve always wanted to do. It was my first time I went to the booking counter with literally no idea where to fly to, after a couple of conversations about where I could see the ‘real’ PNG, I had myself on a flight into a remote area of PNG, Medang. This was also when I realised PNG ain’t gonna be cheap! The 90 minute return flight cost me $400, welcome to Papua New Guinea johnny boy! I hung around in Port Moresby for 2 nights so see what that had to offer, and the next day I was off to Medang. Once there I was desperate to organize going to stay with a local village and watching one of their local dances – face paint and all. So I was running around trying to organize just that and it finally paid off when someone said that I could go to visit a village, witness a ‘sing-sing’ (more on that later) and then on to stay with another village, as long as their Chief Ok’d it. Before long I was off. On the way to the village we picked up the family we’d be staying with, complete with a handful of kids and a pig in a hand stitched net bag. The journey wasn’t 2 minutes old until the pig had sh*t all over the car. So now with the kids crying, the pig snorting and the whole car smelling of sh*t we drove out of Medang and into the jungle. Our driver’s name was Busybee and he delighted in telling us that 20 years ago he was Pierce Brosnan’s driver for 6 weeks as they filmed Robinson Crusoe in the Medang Jungle, very nice man apparently (Sean Connery was stil a better James Bond though). We soon parked up and hiked 30 or 40 minutes through the dense jungle, it had been raining all night so my flip-flops weren’t the wisest footwear choice, after 5 minutes of getting stuck in the thick New Guinean mud I was mixing it with the locals and going barefoot for the rest of the hike. We arrived at the village, were invited into the hut of the extended family we’d be staying with. Busybee, a former villager himself, told us all about their subsistence living. We walked into the dense jungle and Busybee cut us off what looked like a fruit, he sliced it open with his machete and handed half to me and kept half himself. A white gooey core with almond shaped lumps spread throughout stared back at us, but he quickly bit into the mess and began sucking. “You like chocolate Johnny, this is our Cadbury’s, these are cocoa beans, suck them – very sweet”. Traveling is bloody awesome. Someone in the village started banging a drum, he was summoning the other villages in the vicinity to gather for the ‘sing-sing’. There was a tropical storm and the rain was began to pour down, not ideal, but nothing was dampening my enthusiasm, I was in a local village in Papua New Guinea – this is traveling, and I love it. 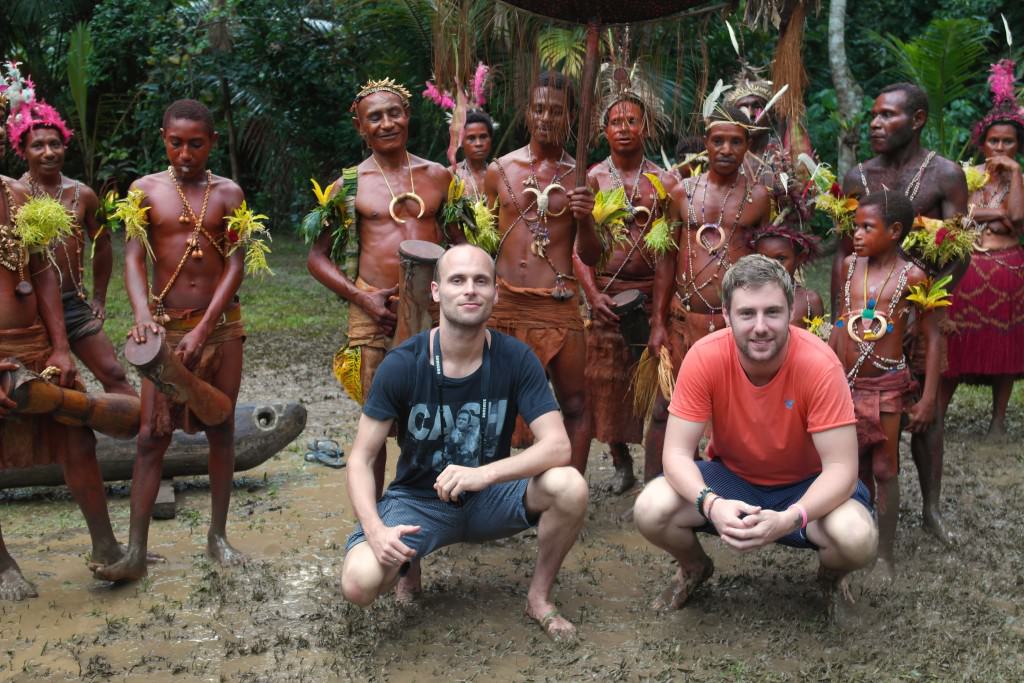 10 thoughts on “Witnessing A ‘Sing-Sing’ In Papua New Guinea  ”