So I’m working on a one month English camp in South Korea the moment  and it’s been quite the ride. The camp itself is only 3 weeks long due to an early Chinese New Year so you wouldn’t expect to much to go amiss… you’d be wrong.

I flew to camp on Christmas day which is never ideal, but it’s only a 6 hour flight so I was looking forward to having a cheeky beer in Seoul before Christmas day ended. That plan sort of went out the window though. I flew from Bangkok to Kuala Lumpur, Malaysia – just over an hour flight, then I had to wait 4 hours for my connection from KL to Seoul (Incheon), South Korea . I thought I’d chill in the airport and make my connection with east.

I sat 6 meters from the airport gate, already checked in, sat with the gate to my back so I could access the powerpoint and watch the Sopranos on my macbook. Malaysian time is one hour ahead of Thai time but apparently neither me or my laptop recognized that fact so the 4 hours I had to spend was actually 3!

4 hours of Sopranos came and went, I turned around to meet my flight, walked the 6 metres and the flight had already gone!! Apparently they had been calling my name on the tanoy for 45 minutes – damn!! An exceptionally kind Malaysian Air Asia employee took pity on me, single handedly dealt with recovering my bag, immigration for entering Malaysia and he managed to book another flight for the next day for only an additional $70 – what a lifesaver. My Christmas wasn’t the best  –  my Christmas day was spent sponging the free wifi in Macdonalds in Kuala Lumpur airport, but I’ll always be thankful to that guy for helping me out. Cheers mate.

The kindness of strangers….

That was the first mistake. Next up, I arrived in Seoul and had to make my way to the city where my English camp was being held, it was a breeze.  A 2 hour bus to one city, then another 30 minutes or so to the next. I got the first bus, no problems at all, jumped onto the next bus. 15 minutes into that I realised I didn’t have my backpack!  I’d left it in the first bloody bus!  Aaaagh!  Sitting, stressing out thinking about the fact that my whole life was in my backpack I tried to come up with a plan. I decided to stay on the bus to the next destination, and when I got there I caused quite the scene. Trying to find people to speak English was a total failure, so it involved me dancing around like a madman pretending to carry an imaginary backpack and then acting surprised followed by distressed.  I think the distressed charades worked though.

An old Korean woman hobbled up to me and handed me her cellphone, somewhat confused I tentatively asked ‘ehh, hello?’, a lady speaking English starting asking me what was wrong. It transpired that the old lady saw me struggling so decided she could help by calling her niece in Switzerland because she could speak English. We translated my missing bag issues through her and the staff at the bus station and when, after a very stressful 20 minutes of thinking I had lost my bag, they had located it and brought it back to the bus station in the last town! I immediately I asked for a ticket to the last town but after some more confusion and their refusal to buy me a ticket I was pretty perplexed, that was until the old lady grabs me by the hand and walks me outside. She took me to her car, jumped in, drove me all the way back to the other city, found me bag for me, jumped back in her car and she not only then drove me back to the correct town but also directly to the front door of my accommodation. What a superstar. The kindness of strangers never fails to impress me, now it’s my duty to pass it on. 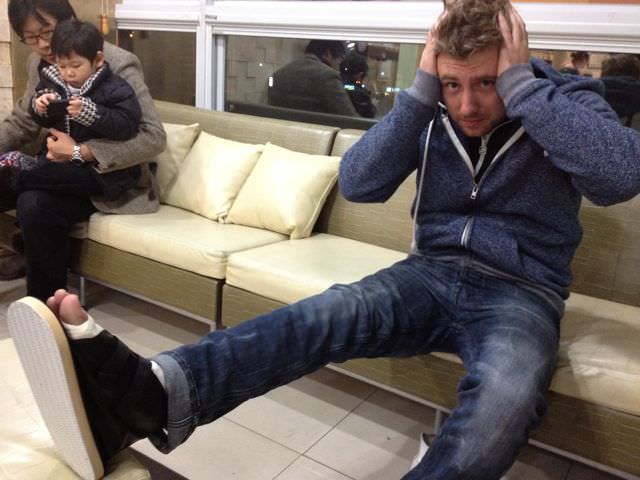 12 days after my lost bag escapade English camp in Korea was going great. The kids were awesome, the staff even more so but then it took a turn for the worse. Showcasing my Beckham-esque football talents (read: showing off in front of 10 year old Korean kids) I ran down a hill and face planted into the turf – classy move. On the way down I managed to twist my (previously broken knee) and go over on my foot. After a lot of attention and feeling rather stupid I got whisked to the ultra-efficient Korean hospital in town and within 2 hours I had seen the nurse, the xray technician, had 2 xrays evaluated and seen the doctor twice. I had only sprained the tendons in my foot and twisted my knee. English camp went against all their contracted insurance laws and just paid for all my treatment for me, they then drove me to class every day until I could walk enough again. Another bunch of superstars.

So the doctor strapped me into a foot splint-brace and I was told I was very lucky the bones didn’t crack and to rest for 2 weeks. The last part was impossible because I’m writing this from North Eastern China about to take a bus from Dalian to Dandong, on the North Korean border ahead of my train into North Korea tomorrow. Hopefully my injuries will hold up, I’m very excited!

Bad luck comes in three they say. But to be completely honest I don’t believe in that, this were 3 difficult situations but they all allowed me to appreciate the beauty of traveling/working in new countries, they reminded me about the goodness in people and they taught me to never get confused with time zones again! Happy travels!