So I’m running the North Pole Marathon in April 2018…

EDIT 2019: I completed the North Pole Marathon, and somehow managed to waddle/shuffle/run myself to 8th place! Which then inspired me to run 6 marathons in 6 days across the Sahara in the Marathon Des Sables 11 months later, you can read about that here!

Life is one big journey, but the road is short if we don’t set goals and strive for them. So after finishing my journey to every county in the world, navigating my way through Yemen via cargo ship and fighting for 9 months for a visa to Saudi Arabia as 2 of my last 3 countries, it was time to make some new goals. Something to really challenge myself. North Pole. South Pole. Then Mount Everest. To become the first person to be on every country in the world, on top of the world, the bottom of the world, the highest point on earth, and the lowest point. Pretty epic. Then I started to look at prices. Ouch. North Pole. $20k. South Pole. $50k. Everest $50k. Better get saving. North Pole is cheapest, so it’s up first. After researching and researching, you know what the cheapest way to visit the North Pole is? The North Pole Marathon!

The North Pole Marathon is really a thing?!

So I contacted the organisers of the event and yup, it’s real. More than that, it’s an Irish guy who runs the event, and it sells out every year. I was lucky to squeeze onto the 2018 one in April. Roughly 50 people each year do it.  There are basically 3 ways to get to the North Pole from my research, ‘cheat mode’ of flying in for an hour and flying out, that’s about $22k I think. Next, you can do an expedition – huskies, or slugging your pack behind you, weeks of trekking, pretty epic, but also much pricier – $40k+. And then there is the Marathon! It’s the cheapest way and you get to do something awesome. I had always planned to do a marathon, and North Pole is a dream, so why not do both at one time, right?

It’s -30 degrees, so the gear is important (I haven’t got any of it yet, always last minute, eurrrgh), it also means the times are so important. The ‘world record’ here is 3 hours 30, vrs just over 2 hours at a normal level. So it won’t be fast. My personal goal is under 6 hours, let’s see!

So wait, you’ve never run a marathon before, and your first one will be at the North Pole!?

Ermmm yeah. Crazy? Let’s hope not. I’m not an experienced runner by any stretch, although I do love both fitness and cardio. I can churn out a 10km on a treadmill at an ok level (45-50 mins), and I’ve done a couple of unofficial half-marathons with my sister which were kind of ok, if a little painful. Oh and one time I ran around the smallest country in the world, Nauru, int he middle of the Pacific ocean, that was roughly half-marathon distance.  I’ve never done a marathon though, and ever since smashing my knee up in a motorbike crash in Thailand, I’ve been worried if my right leg is up to the challenge, that’s the reason why I’ve never done one before.

Training then. By all general consensus, 16 weeks is needed to train for a marathon. I’ve been half-heartedly doing 10km runs most days on the treadmill, not ideal but better than nothing. Now with less than 2 months to go, I’m going to try to start taking training seriously. I’ve found the sheer amount of time it takes to train for a marathon difficult, running for hours! All my past fitness experience has been with the amazing Aspire Club gym in Bangkok, where you workout with friends, and it’s like a gym family, so training alone has been really tough. With that in mind, to make sure I still commit, I’ve committed to going back to Aspire every second day so I get the best of both worlds, every other day boring long distance runs, and the off days, train with friends at Aspire on another challenge. I don’t expect the results to be as good as last time though!

How Do You Get to the North Pole?

You fly to Oslo, Norway then connect on a flight to Svalbard (a Norwegian island in the Arctic Circle). From there, the North Pole Marathon team pick you up, fly you in a specialist ‘ice plane’ to the vacinity of the North Pole, and then as far as I’m aware you take a helicopter to the actual North Pole, spend a couple of days there prepping, sleeping in tents, and then do the 42km/26 mile run right there. Crazy.

The North Pole isn’t land, it’s an ice sheet.  Only 10m between us and the freezing cold ocean, and death. It’s constantly moving. At the end of the Marathon, we make a beeline to the geographic North Pole if it’s moved and it’s mission accomplished. So special planes, special helicopters, and a very special race. Fingers crossed.

How Much Does the North Pole Marathon Cost?

A lot. The most money I’ve ever spent on anything ever, aside from property, investments and crypto. It costs either $20,000USD in installments or $19k up front. A hell of a lot of money. That includes everything (as it bloody well should!), armed guards to protect you from polar bears, insurance, flights, accommodation, the marathon stuff etc. On top of that you need to get to Svalbard, which isn’t cheap, then you need flexible hotel bookings in Svalbard as the North Pole marathon is regularly delayed by up to 10 days or so. Then your return flight needs to be flexible too. All in, that’s probably another $2k. Not cheap. But heh, it’s the North Pole!

My Thoughts and Plans and Worries…

To be honest, I’m scared and nervous. I’m scared I’ve left it too late to train properly. I’m nervous that after spending so much money, something could go wrong whether that’s injury, or some weather problems when I’m there. I’m also worried I’ve bitten off more than I can chew with my schedule that month. I’m doing our GiveBackGiveAway india charity project on March 15th to April 2nd. The NIGHT of April 2nd then, I fly to Svalbard to do an epic 3/4 day trip with BaseCamp Explorers, riding a snowmobile across Svalbard, hoping to spot some Polar Bears. The day that ends, I fly to the North Pole, spend a few days in tents up there, run the North Pole Marathon, then fly back to Bangkok for 3 days, before connecting straight to the Philippines for our GiveBackGiveAway Philippines charity project (some spots still available for both India and Philippines if anyone wants to join, just click those links above). That’s a punishing schedule. I hope I can manage it. Wish me luck! 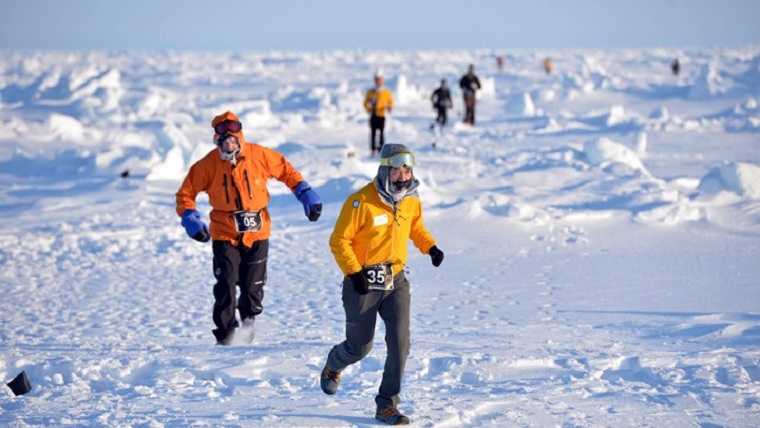 Previous Post
Traveling to Socotra; A One Week Itinerary

Next Post
How To Visit the Snow Monkeys Japan

29 thoughts on “I’m Doing The North Pole Marathon – This Is Going To Be Hard!”