Belize is the only country in Central America which has English as their mother tongue, and the culture is much more Caribbean than Hispanic. Nowhere is this more true that Belize’s most famous backpacker hang out – Caye Caulker island. Although Belize isn’t quite a battered tourist market like Thailand, it’s certainly growing in popularity. This is partly down to a few things

1)   It’s an easy night bus from the notorious party hotspot of Cancun, Mexico.

Backpacking paradise! I stayed there for 3 nights and had a great time. One of the most popular things to do in Caye Caulker, aside from get drunk all day at the bar on the beautiful spit, is too take one of their snorkeling tours. There are so many operators hawking tickers as soon as you land it can all be a little stressful. I love to support local owned business where possible, the rich foreigners have enough money as it is! Ezboys Snorkelling company are 100% local owned, they own their own boats, no sleazy middlemen getting in the way and they’re right on the pier – that was a very easy choice for me! The snorkeling trips in Belize last a half day, leaving around 11 and coming back around 2 normally with 3 stops or so. The first stop involves the free-diving guide to bring the 4 or 5 people from the boat on a guided snorkeling tour. The water in Caye Caulker has to be seen to be believed, you can see the bottom of the ocean even when you’re miles out in deep water – it’s insane. 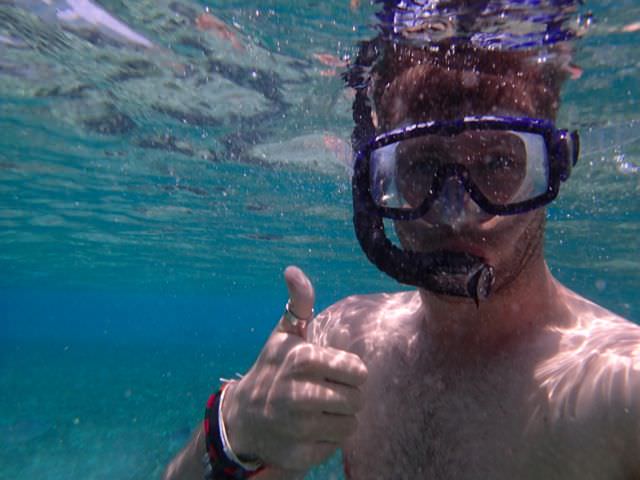 The free diver swims out with the people and is always diving to the bottom of the ocean to point stuff out while you snorkel above, he pops up, explains something and then carries on. I’ve never seen a snorkeling tour done like this before but it’s really, really cool – everybody should run their tours like this!

The final stop (I’m jumping to number 3, because number 2 is so special I wanna leave it to the end!) is more of a normal snorkeling trip where they park the boat, let you jump into the ocean and snorkel around the coral for 30 minutes or so. It’s beautiful but after the cool first stop, and the epic second stop it all seemed a little boring to me. Now, what about that second stop huh? This is what snorkeling in Caye Caulker is all about! We took the boat over to the sport where the Manta Rays and small sharks live and as soon as they heard the boat’s engine they flocked to us. Over the generations, with the local guys feeding the sting rays, they have begun to associate the engine sound with food – so they come in the horders, literally maybe a hundred of them! I was a bit freaked out to be honest, but 5 minutes later and we’re jumping into the water in the midst of them. Now I’m literally surrounded in sharks and manta rays, they are everywhere. You can hardly move without stepping on one, they’re coming right up to you, running along side you and actually they are super friendly. Dipping your head in the water with your mask on is one of the most surreal sights I’ve witnessed, dozens of sharks and manta rays swarming us, loving the interaction with humans. It was really special, and far, far exceeded my expectations of any generic snorkeling trip, so a big thanks to EzBoys for a cracking session! Naturally being Irish however my skin however didn’t enjoy it so much. I hadn’t really put any sunscreen on so I was so, so, so sunburnt – the next 2 days I spent super hungover (blame that gorgeous bar on the spit) and in a lot of pain, air-con maxed out at 16 degrees – I’ll spare you guys the pic of the skin literally peeling off my entire back. Live and learn – happy travels!!